I am really excited to be spending this summer working at NASA’s Jet Propulsion Laboratory (JPL). I prefer to have a car while I’m out there (so I can get to all the hiking spots, of course!), and, since I’m far too frugal to even contemplate shipping my car, I drove across the country this week. I’ve made similar trips twice in the past: once for an internship at Edwards, CA, and once again to go hiking in Yosemite last summer. I decided to shake things up a little this time. Previously, I’ve driven on I-70 and I-15 to get to SoCal, and I’ve driven I-80 a few times as well. I haven’t driven the southern route, I-40, before, so that’s what I’ve done this week. I was able to see much more of Oklahoma than I ever have in the past and visited New Mexico for the first time! Interstate 40 also passes near the Grand Canyon, so I headed there after spending a night in Albuquerque.

Although I tried to secure a campsite in the national park, everything was booked so I settled for a campsite just outside the park. “Settled” is perhaps the wrong word; the campsite was perfectly fine, and probably less crowded and quieter than any of the sites in the park. Plus, it was only a five-minute drive to the gate! The landscape in and around the Grand Canyon is a curious mix of several different ecosystems. The campsite I stayed at, Ten-X (just south of Tusayan), is in a forest of large pines. If you drive a few miles north to the canyon rim, the pine trees give way to smaller shrubs and trees. Within the canyon, the trees disappear altogether and you find yourself in a desert landscape.

Temperatures also vary widely. At night, temperatures reached the low 30’s at my campsite. The canyon rim, on the other hand, only dropped to the mid 50’s, and the canyon floor had lows in the mid 70’s!

After setting up my tent and shuffling some of my gear around, I drove into the national park and found my way to the visitor center. None of the “standard issue” maps have much info about the hiking trails that descend into the canyon, so I paid a visit to the backcountry information center. Pro tip: if you need to talk to a ranger about hiking, go to the backcountry info center. There was a line of 50 people waiting to talk to a ranger at the main visitor center, and there was absolutely nobody at the backcountry center. I was interested in hiking part of the Bright Angel Trail, which winds its way from the canyon rim all the way down to a campsite on the Colorado River at the bottom of the canyon. The ranger I spoke to spewed warnings about the hike: The high temperature at the bottom of the canyon is 102! It will take you twice as long to hike out (all uphill) as it will to hike in! Take lots of water and salty snacks! If you drink too much water, you can drown! Soak your clothes with water at every water source to stay cool and avoid heat stroke!

I left the backcountry information center with a map, most of which was covered in similar warnings, and spent the rest of the evening strolling along the canyon rim trail, admiring the views. I watched the sun set from a rock outcropping near Yavapai Point. After receiving so many warnings about hiking into the canyon, I found it a little ironic that practically all of the canyon rim has no guard rail. You could fall to your death at many scenic locations! I suppose they have to choose their battles, and attempting to keep tourists away from the very edge of the canyon is likely an impossible task.

Sunset was not as impressive as I hoped it would be. There were no clouds in the sky, so it wasn’t a particularly colorful event. Still, I snapped some nice shots before it became too dark to make out any detail in the canyon. Once the sun had set, I returned to my campsite and got some sleep to prepare for a hike into the canyon the next day. 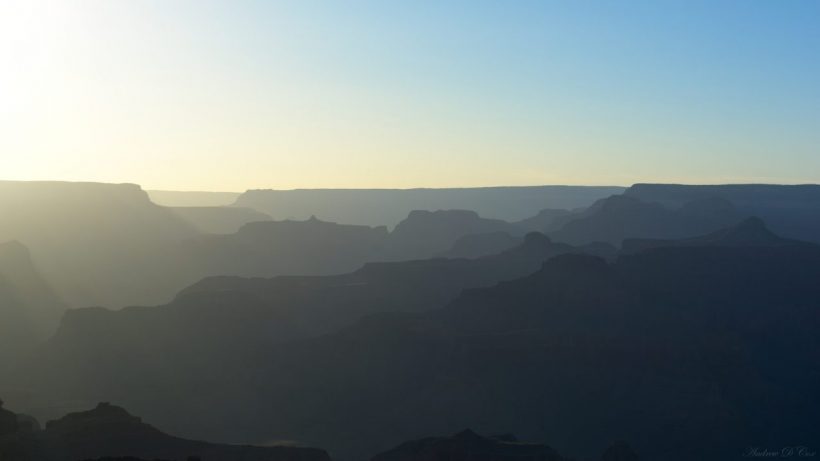 I woke up the next morning about an hour before sunrise in order to get an early start before the terrible, heat-stroke inducing day arrived. It was in the low 30’s at that point, so I was a little skeptical that it could possibly reach 102. I donned a fleece jacket, grabbed a backpack of snacks and photography gear I’d prepared the night before, and drove to the trailhead. I started the hike at 5:00 sharp, about 20 minutes before the sun broke over the horizon. It was noticeably warmer at the rim, so I didn’t bother bringing the jacket along.

I made good time down the trail and arrived at the first shelter a little more than an hour after I’d begun. The Bright Angel Trail has shelters with shade, restrooms, and running water about every 1.5 miles, so there is absolutely no need to pack much water. I brought two bottles and that was plenty to hold all the water I could possibly drink between the shelters. I snacked on some trail mix and continued on down the path toward Indian Gardens.

I don’t have any photos of Indian Gardens, unfortunately, but it is a beautiful little oasis in the midst of the desert. A small creek springs from a fault line and there are many lush, green plants and trees crowding its banks. From here, I left the Bright Angel Trail and the cool shade of Indian Gardens and trudged out toward Plateau Point. My biggest fear on this part of the hike was rattlesnakes; I was out away from most of the other hikers, surrounded by cacti, sagebrush, and rocks, a perfect environment for snakes. Thankfully, I didn’t encounter any, though I did see lots of small lizards. The view from Plateau Point was neat, but I didn’t stay long because it was beginning to get hot. My watch read 8:00 AM, and it already felt like 80 degrees outside! Perhaps the ranger was on to something…

The hike back out of the canyon was not nearly as bad as the ranger had foretold. Yes, it was hot, I drank much more water, and I had to stop to take breaks a few times. However, I was back at the canyon rim by 11:15, sweaty and smelly, but certainly not stricken with heat stroke. On the way up, I passed many hikers just beginning their trip down into the canyon. They might have some issues, as it was easily above 80 degrees and would only get hotter for their ascent. A few mule trains passed by, and I saw a mountain goat!

So, my verdict on the rangers’ warnings is mixed. On the one hand, if you start early in the morning (i.e., at or before sunrise) and are in good shape, you can easily make it in and out of the canyon before the heat really kicks in. I made it to Plateau Point and back in 6:15:00, and it was more of a 1:1, descent to ascent, time ratio. I would even venture to say that you could, without much trouble, hike all the way down to the Colorado River and back out, which they claim is absolutely undoable. That hike would include a few thousand feet of extra vertical ascent/descent, but only 1.5 more miles than I hiked, so I think I could have completed it by 1 PM (and wouldn’t have died of heat stroke or drowned from water consumption either… :P)

I spent the rest of the afternoon visiting various lookout vistas via the shuttle bus. Honestly, once you’ve seen one vista, you’ve more or less seen them all. However, the little placards with historical facts and other interesting information were interesting to read! Did you know there used to be a Uranium mine on the canyon rim? These are the things you learn by reading the signs. I also visited Desert View and the watchtower. The views there were a little different from the views near the village; the canyon is wider (and maybe shallower), and the Colorado River is more clearly visible from the rim. 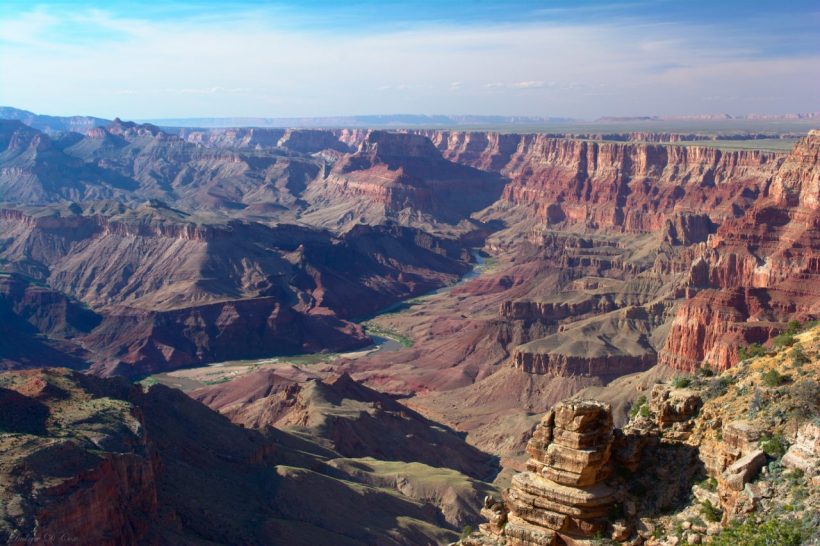 The Grand Canyon, from Desert View

It isn’t often that I’m in a location with as little light pollution as the Grand Canyon. While I was at Desert View, I scoped out some locations for astrophotography shots. I would have liked to get the canyon in as a foreground element, but I couldn’t see a way to illuminate it. In retrospect, the solution would have been to find a good composition and wait for Moonrise at 4 AM; the Moon would light the canyon. This would require careful timing and a vantage point that aligned a view of the canyon, the Moonlight, and Milky Way, but I think it would have been doable. Next time, perhaps. The watchtower at Desert View presented a perfectly good foreground element, however, so I planned to rise early the next morning to take some astrophotos. To get dark skies, I needed to be out before the Moon rose at 4. Factor in 75 minutes of time to take pictures and try different compositions and we’re down to 2:45. It takes 45 minutes to get from Ten X to Desert View, so I set my alarm for 1:30 AM… that doesn’t qualify as the morning, that is the middle of the night. The things I do for a cool photo… ah well, there’s always coffee!

I woke up at the prescribed time the next morning and enjoyed the drive to Desert View without any slow RVs in my way. Unsurprisingly, there was absolutely nobody else at Desert View when I arrived, and I wasted no time setting up my tripod and taking some test shots. I didn’t expect the tower to be lit, but it was and I worked with it. I think the light actually worked out quite well! Thankfully, the lights weren’t so bright that they ruined the view of the stars and a long exposure shot to capture the Milky Way didn’t blow out the tower. I used Darktable to post-process these images (all single images, not stacks) by following some of the methods described by Harry Durgin in his video tutorial.

I stuck around to take a few sunrise shots and then headed back to camp. I packed up my things and hit the road again for one last day of driving to reach California.