The Sam Merrill trail is a popular route for Altadena and Pasadena residents. From the trailhead, a short 2.5-mile walk delivers a hiker to Echo Mountain; walk another 2.5 miles further into the mountains and you reach Inspiration Point, a covered seating area with great views of Los Angeles. Having hiked up to Echo Mountain and Inspiration Point a few years ago, I decided to walk a bit further today and visit the summit of Mount Lowe. With a total distance of 13 miles and an elevation change of 4000 feet, this loop is a great day hike!

Bring plenty of water and sunscreen, for there is little shade on this hike. You don’t need any kind of permit and ample free street parking is available at the trailhead. I don’t have a map recommendation for this area; you may find the Tom Harrison maps useful, but the trail signage is fantastic and navigation is straightforward without a map.

I begin my hike at about 7 AM at the Sam Merrill trailhead. Even at this early hour on a Sunday morning, I pass dozens of hikers on the way up to Echo Mountain. Thankfully, the crowds thin out significantly past Echo Mountain and I find myself alone on Castle Canyon trail, only passing a handful of people during the steep 2-mile climb to Inspiration Point. It’s a nice cool morning; the sun hasn’t quite made it over the mountains so the trail still lies in shade. As I gain altitude, I begin to notice more and more wildflowers and every once in a while I catch a whiff of mountain air loaded with the scent of the numerous blossoms.

The Castle Canyon trail switches back many times as it climbs from Echo Mountain to Inspiration Point, and, at the corners of the switchbacks, I’m frequently afforded sweeping views of Los Angeles. The higher you hike, the better the views get. 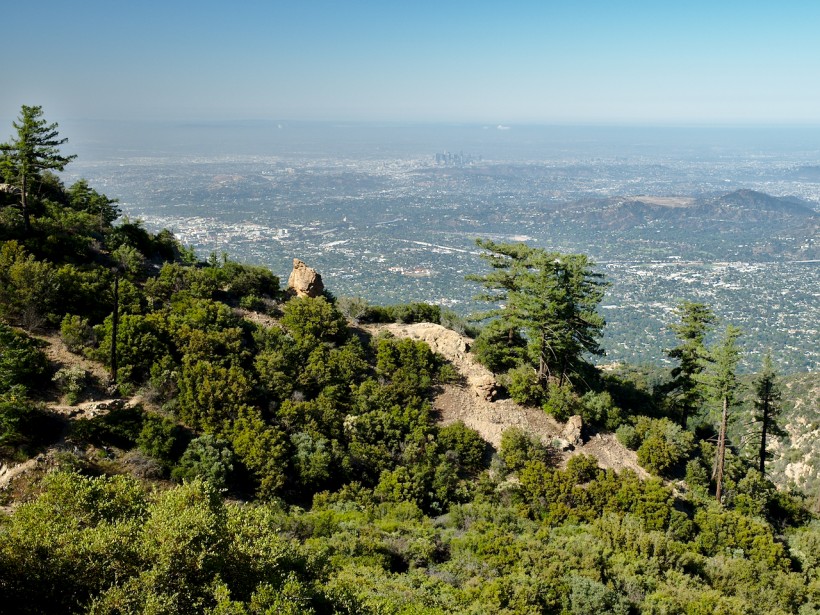 Some mountains in the foreground, Los Angeles in the background

If you hike to Echo Mountain, you’ll enjoy grand views of Altadena, Pasadena, and the LA skyline as well as the LA smog. Once you reach Inspiration Point, Echo Mountain becomes part of the view: a tiny cluster of crumbling foundations on a distant ridge. Inspiration Point is marked by a sort of pavilion with a few relics from the Mount Lowe railroad and a dozen “sighting tubes” that guide a viewer’s gaze to the location or landmark printed on the tube.

A view of Pasadena, Glendale, Los Angeles, and more from Inspiration Point

Inspiration Point marks the end of the shade on this particular hike. The sun has risen higher into the sky and there are hardly any trees or higher ridges to shade the trail. I crunch along the Mount Lowe fire road for a few minutes until I reach the Mount Lowe East Trail, a narrow path covered in mountain bike tracks that climbs higher into the mountains. Many use trails split off from the main trail and I take a wrong turn, only realizing my mistake after I reach the top of a steep gravel wash, panting from the exertion. The use trails all link back up – I’m not lost – but lesson learned: When in doubt, take the shallow trail. 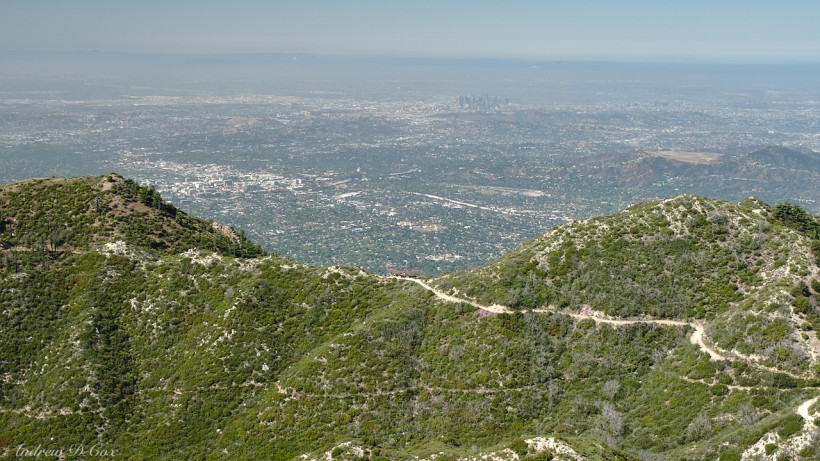 As I climb higher, Inspiration Point becomes part of the view

The views of LA continue to improve as I climb higher and higher; Inspiration Point becomes a small spec of red shingles next to the blazing-white fire road in a sea of green shrubs. In addition to the more impressive views, the wildflowers are more prolific at these higher altitudes. While my nose enjoys the sweet smell, my ears treated to the soft hum of hundreds of bees pollinating the flowers and the rhythmic crunch-crunch-crunch of my shoes on the dusty trail. 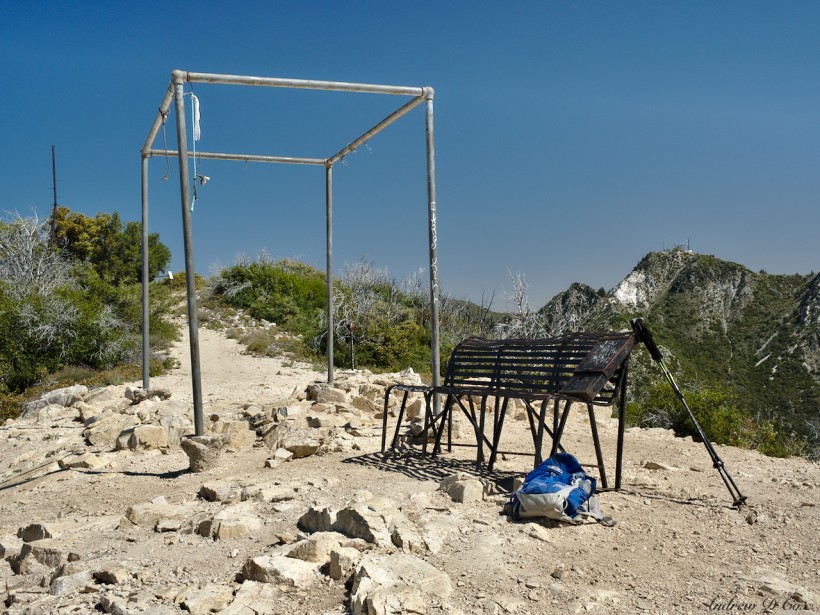 A short while later, I reach the intersection of the Mount Lowe East and West trails and turn toward the summit. At the peak, I find a rusty bench, an old hitching post, and some sort of pipe structure. A metal box lying on the bench contains the summit log, and I enjoy reading what others have written. There are lots of inspirational messages, a few braggadocious (and probably fictional) claims of sexual exploits on the bench, and some impressive pen drawings of the scenery. Speaking of the scenery, the nearby peaks are beautiful in a rugged sort of way: dusty stone carpeted with greenery. Well, greenery for now; it will all fade to various shades of brown later in the summer. 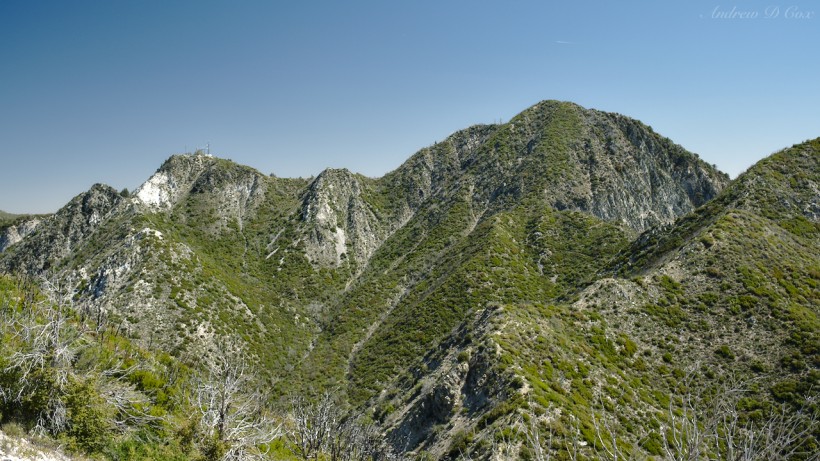 While the views are impressive in magnitude, they’re not the same as those magnificent high-altitude vistas in the Sierra Nevada Mountains with alpine lakes and snow-clad peaks. Sometimes you have to accept the fact that the vistas will consist only of dusty desert peaks and smoggy Los Angeles. But there are other senses to satisfy; the olfactory experience is phenomenal today, and it is wonderfully quiet up here at the top of the world. Well, not quite the top of the world. San Gabriel Peak, just one ridgeline over, is 500 feet taller than Mount Lowe. I briefly consider taking a detour to see what its summit is like but decide against it after evaluating my water supply. I only have one liter left and my return journey is already 6.5 miles long; best to save San Gabriel for another (maybe cooler) day. 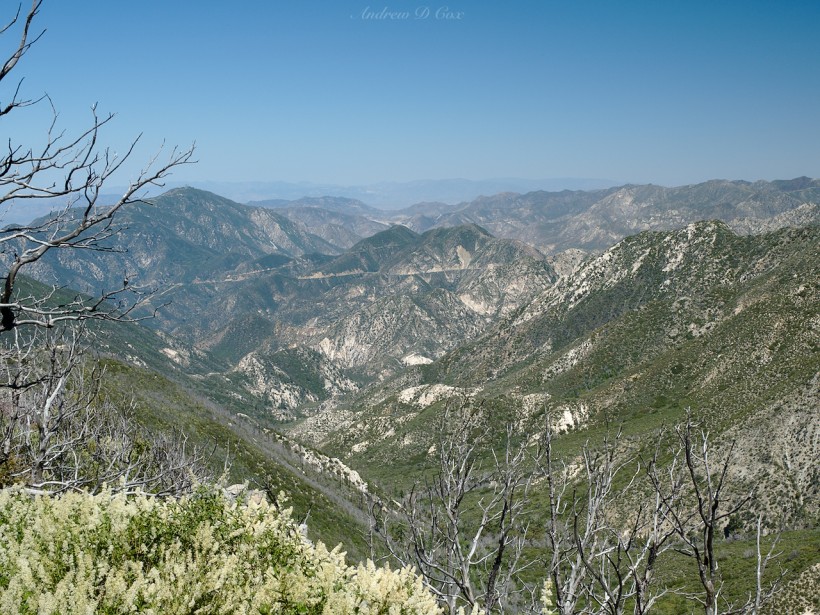 A few fire-scarred trees and, beyond, the desert landscape of Angeles National Forest

To mix things up a bit on the return trip, I take the Mount Lowe West Trail down. It’s more overgrown than the East Trail but seems to be the preferred route judging by the occassional sighting tube along the switchbacks. A century ago, a narrow-gauge railroad ferried visitors from Altadena to the foot of Mount Lowe; they could then reach the summit via foot or horseback. I assume the sighting tubes are left over from those tourist-centered days. Once you’ve hiked in these mountains, read the story of the Mount Lowe Railway; it’s fascinating!

The Mount Lowe East Trail ends at the fire road. I follow the road past whats left of “Ye Alpine Tavern” (spoiler alert: not much) and then hike along the Sam Merrill trail for several more miles, descending a few thousand feet to the trailhead. After the knee-destroying, hot, dusty descent, I’m tired and I head home for some ice cream and an afternoon nap.